A friend whose family comes from Seliana told me about the old hotel and airport somewhere above Seliana.
I was in Greece many months ago.  I was fascinated so I went there with another friend in April and we walked around the forest above Sarantapiho and managed to locate the hotel and airfield, of which I have some photos if you are interested.
It was a splendid day, in a beautiful mountain. So I was very curious - when did Farouk go there? And so on. Another friend sent me a link to your article…
Farouk, probably came in 1939 at Sarantapicho, perhaps with his sister including Queen of Persia.  But have not found any documents for this....
Anyway, I attach a note which contains:
A translation of your excellent article which I hope is reasonably accurate but with some minor changes, in case it is useful
A summary about Farouk's life
Perhaps you could post the translation and attract foreigners there, to the benefit of the local people and the Greek economy!
Best wishes,
George Roussopoulos, England

A. The beauty of the landscape and the history of Sarantapiho
http://aigeira2.blogspot.gr/2011/07/blog-post_7251.html?m=0
(blog in the newspaper “Frouros” by Costas Rozos)
This is not the first time that our paper has dealt with the region of Sarantapiho - it is a favorite destination of ours, roughly 30km south of the coast.
Sarantapiho is a small mountain village in the municipality of the prefecture of Corinthia Evrostinis. It is built like an amphitheater, at an altitude of 1230 to 1300 meters in a dense forest of black pines and firs. 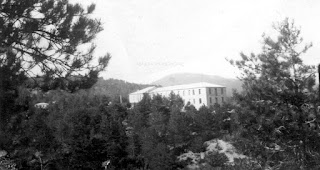 Two roads lead there, starting from Derveni or Egira on the coast of the Gulf of Corinth. The easiest ascent is by the road to Goura then Feneo from the exit of the National Road Athens-Patras at Derveni towards Rozena then Evrostina. About 10km later, take a right turn off the main road and the village is reached after ca 5km. 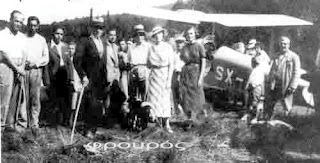 The other, from Egira, more impressive but more difficult and west of the first, is via Eges towards Seliana where, just after the village, you turn left on a dirt road towards the Monastery of the Holy Apostles, and there left again on a steep forest road which may require a 4 wheel drive in wet conditions. After climbing a few kilometers through a dense and beautiful forest, the first houses of the village appear on the right. To the left, deep in the countryside, lies the plain of Velo. According to local historians , the name comes from the Byzantine family Sarantapihou (cited in the book “History and Folklore in Zacholi” by the Priest Nicholas G. Papandreadis, which was given to the writer).

Irene Sarantapechnaina, c752-803), best known as Irene of Athens, was the second wife of the Byzantine Emperor Leo the 4th the Khazar and became the Empress Dowager on his death in 780. After she died the family settled in our area, founded the village and gave it their name. It is said that a relation Romanos founded the monastery of Prophet Elias on Kouto.
From 1834 until 1840 Sarantapiho was the seat of the municipality of Xelidoreas. From 1840 onwards it was a commune in the municipality of Zaholis and then of Evrostinis. Sarantapiho is the 26th highest residential settlement in Greece at the altitude of 1252m.
From 1927 to 1940 the area became an international centre for recreation and rest cures. The newspaper "Hellenic Future" of 1 September 1929 listed the names of visitors from Holland, German, Switzerland, Belgium, Romania, Czechoslovakia and Egypt who spent their summers in Sarantapiho.
In 1932, Spyros Nikoloulea of Egira and Spilios Chrysis of Akratinostook the risk of investing in tourism, building a luxury resort of a kind rare in the 1930ies. These entrepreneurs aimed at a rapid development to attract hundreds of European visitors and succeeded.
They built the " Anagennisis" or Renaissance Hotel which had 70 rooms with bathrooms , a restaurant and a big hall , a telephone call centre, generators for power supply, mains water, an ice factory, tennis and other sports , cinema club etc. There were also 3 separate buildings that hosted prominent guests - King Farouk of Egypt stayed in one of them.
John G. Spyropoulos (1896 - 1973, Professor of Public International Law in Athens, Judge of the International Court of Justice and member of the Academy) helped. Thanks to him and his friends, Sarantapiho attracted rich visitors from Greece and abroad.
Daily walks, excursions and hunting trips were laid on. All these were arranged by the families of John G. Spyropoulos, Konstantinos Logothetopoulos (1876-1961, Professor of Medicine and Dean of the University, Prime Minister of Greece 2 December 1942 to 17 April 1943) and Anastasios Aravantinou (Doctor, Professor, Academician) which held high positions in Greece and Europe. 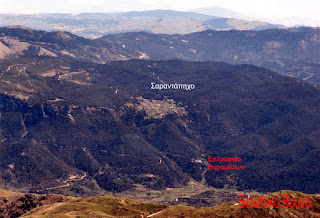 Along with the Renaissance complex, daring entrepreneurs like Panayotis Fileris, Theophilos Stathis, George Panoutsopoulos, Panayotis Koletsos from Aigeira and others advanced the region's tourism. An elementary school was also opened for a few months each year in Sarantapiho.
In the 1930s an airport was prepared at Sarantapiho to serve wealthy visitors. At 1315m, it was one of the highest in the world at the time. The first landing took place in July 1935. Aircraft with 25 seats from English and German charter companies used it.
Clients also came by Greek and foreign ships, especially from Egypt and Italy. Students and doctors from Egypt often attended seminars and conferences organized in the hall of the hotel. 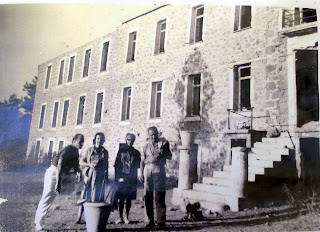 In 1934 the the second official Panhellenic Winter Sports took place at Sarantapiho, with a 15km endurance course,  a downhill etc - the first had been held at Parnassus and Panachaiko in 1933.
In the 2nd World War the airport runway was destroyed by the Italians. Bulldozers opened large ditches to prevent any landing. These became large streams and the area filled with fir and pine, as it is today.
The whole village and hotel were abandoned and fell into ruin. The hotel complex was pillaged by 1950: horses and mules loaded material from the buildingsand used them for new homes elsewhere. Later they even took the tiles from the roof! Snow eroded the walls and the building collapsed .
Today, all that remains of the grandeur of the hotel is a pile of stones, of rusting iron lost in a forest, as reflected in the photo taken in 2002. 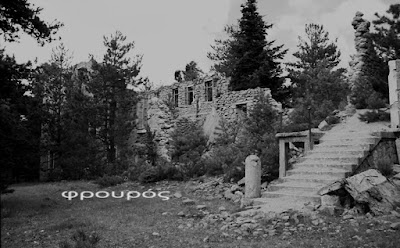 Athena Sideris, nee Nikoloulia, spent many summers there with her family and shortly before her death told us many stories about the hotel. She remembered one airplane that came down badly and how they had received one of the clients who had a severe fracture in his leg following an accident. She gave us photographs from that period too.

B. King Farouk
Succeeds as King in 1936, overthrown in 1952 by the Egyptian Revolution
Farouk was enamoured of the glamorous royal lifestyle. Although he already had thousands of acres of land, dozens of palaces, and hundreds of cars, the youthful king often travelled to Europe for grand shopping sprees, earning the ire of many of his subjects. It is said that he ate 600 oysters a week. His personal vehicle was a red, with coachwork by Figoni et Falaschi; he dictated that, other than the military jeeps which made up the rest of his entourage, no other cars were to be painted red.
Farouk was widely condemned for his corrupt and ineffectual governance, the continued British occupation, and the Egyptian army's failure to prevent the loss of 78% of Palestine to the newly formed State of Israel in the 1948 Arab-Israeli War. Public discontent against Farouk rose to new levels. In the American Central Intelligence Agency, the project to overthrow King Farouk -known internally as "Project FF [Fat Fucker]" - was initiated by CIA operative Kermit Roosevelt, Jr. and CIA Station Chief in Cairo Miles Copeland, Jr. (who in his book the Game of Nations boasted that he later had an office next to Gamal Abdel Nasser in the Presidential Palace in Cairo).
Farouk fled Egypt in great haste, and his abandoned possessions - including a huge collection of pornography - became objects of curiosity and ridicule. On his exile from Egypt, Farouk settled first in Monaco, and later in Rome.
Farouk was thin early in his reign but later gained weight. Weighing nearly 136 kg, an acquaintance described him as "a stomach with a head". He died in the Ile de France restaurant in Rome on 18 March 1965. He collapsed and died at his dinner table following a characteristically heavy meal.
While some claim he was poisoned by Egyptian Intelligence, no official autopsy was conducted on his body.
Αποστολή με μήνυμα ηλεκτρονικού ταχυδρομείου BlogThis!Μοιραστείτε το στο TwitterΜοιραστείτε το στο FacebookΚοινοποίηση στο Pinterest
Νεότερη ανάρτηση Παλαιότερη Ανάρτηση Αρχική σελίδα 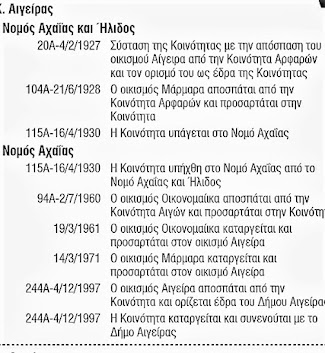 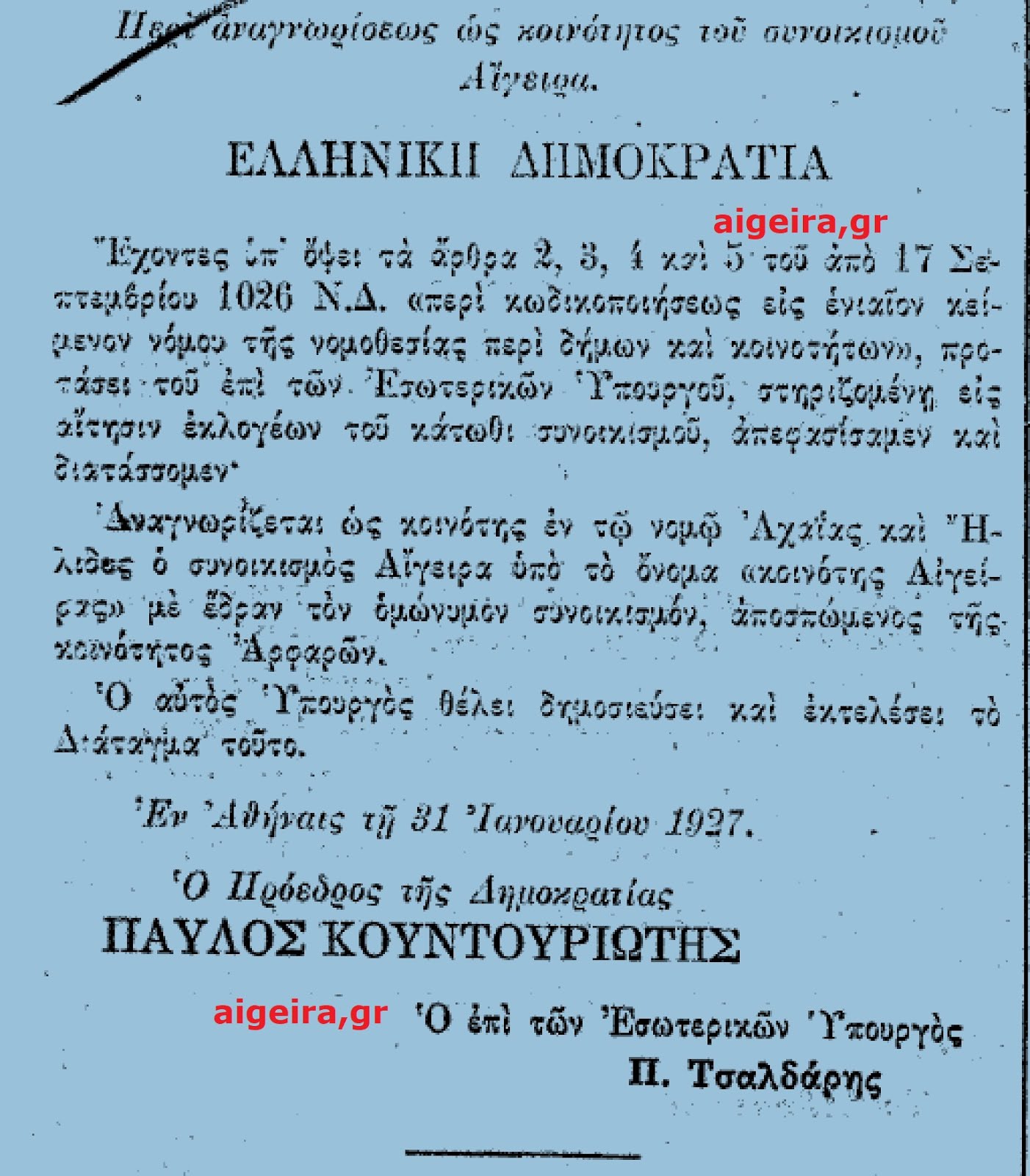 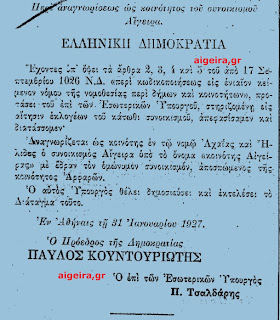